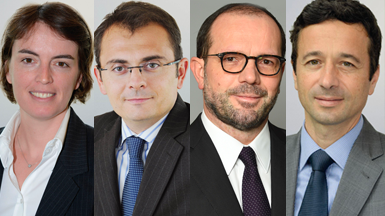 These appointments contribute to successfully address the ambitions of the New Dimension strategic plan, and in particular of asserting our world-leading position in active asset management and of becoming the “go-to bank” in 4 selected sectors for Corporate & Investment Banking. They also strengthen the Originate-to-Distribute strategy, essential in Natixis' sustainable value creation model.

Anne-Christine Champion began her career in 2002 at CDC IXIS Financial Engineering, where she handled the execution and origination of infrastructure financial advisory and arranging mandates. In 2009, she was appointed Head of Project Finance for France, Germany and Benelux. In 2012, she became Global Head of Infrastructure & Projects. In 2016 Anne-Christine Champion was appointed Global Head of Portfolio Management. Since March 2018, she has been Global Head of Distribution & Portfolio Management.

Anne-Christine Champion, aged 42, is a graduate of Ecole Normale Supérieure de Lyon, she holds a Master in Solid State Physics and an MBA from Collège des Ingénieurs.

Olivier Delay began his career in 1992 at Crédit Lyonnais London where he worked as Agent on the Eurotunnel transaction. In 1994, he joined the Infrastructure Project Finance department in Paris. In 2001, he became part of Calyon’s North American Project Finance team in New York where he successively headed up the Project Bonds and the Long-Term Asset Securitization teams. He joined the Natixis New York Debt Platform team in 2008 and became Head of Project Finance for the Americas Platform in 2011. In 2013, he was appointed Head of Aviation, Export & Infrastructure Finance in the Americas Platform. In 2015, Olivier Delay was appointed Global Head of Aviation, Export & Infrastructure Finance. Since March 2018, he has been Global Head of Real Assets.

Olivier Delay, 49, graduated from the EDHEC business school and the London School of Economics.

Dominique Fraisse began his career in 1989 at Banque Française du Commerce Extérieur where he held the position of account officer in the commercial banking department. He was then appointed Head of South-East Asia at the International Division in 1992. In 1997, he became Head of Commodities South America at Natexis in São Paulo, and was appointed Global Head of Metals for Natexis Banques Populaires in 2001. In 2007, he was appointed Deputy Head of Global Energy & Commodities at Natixis.  In 2013, Dominique Fraisse took up the position of Global Head of Energy and Commodities. Since March 2018, he has been Global Head of Energy & Natural Resources.

Cyril Marie, 43, is a graduate of Paris-Dauphine University (DEA Finance).