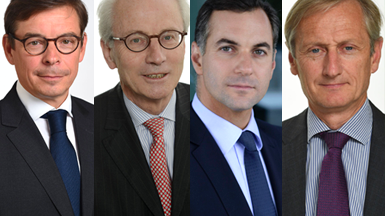 Jean Cheval, member of the Senior Management Committee, Head of Finance and Risks, becomes Senior Advisor to Laurent Mignon, Chief Executive Officer of Natixis. He will also be vice-chairman of the Credit Committee.

These appointments are effective October 1 and after that date, the composition of the Senior Management Committee of Natixis will be:

*Member of Senior Management Committee by end of 2017

After starting his career in various consulting firms and then at the Commissariat Général du Plan*, Jean Cheval joined Banque Indosuez where he was successively Chief Economist, Head of Strategy and Budget, Head of Structured Finance and then Head of Middle East and Asia before becoming its Chief Executive Officer, member of the Board.of Directors. Jean Cheval joined Natixis in June 2009 as Head of Structured Finance; he became Head of Finance and Risks, the second Senior Manager of Natixis, and a member of the Senior General Management Committee in 2012.

Jean Cheval, 68, graduated from École Centrale de Paris and from the University of California, Berkeley.

Pierre Debray has spent a large part of his career outside France. He started in 1990 with Crédit Lyonnais in Paris, now Crédit Agricole CIB, within the Project Finance department. In 1994, he became CFO of the Brazilian subsidiary Banco Francês e Brasileiro and subsequently Head of the Credit department in New York. After two years in Paris supervising the Central&Eastern European network he moved back to New York in 2001 to lead the development of the Latin American activities. Pierre Debray joined Natixis in 2010 as Global Head of Asset & Export Finance. In September 2012, he became a member of the Natixis Executive Committee and Global Head of Structured & Asset Finance, renamed Global Finance in 2016.

Pierre Debray, 53, graduated from Ecole Polytechnique and ENSAE, and holds a Master’s degree in Engineering and Economic Systems from the University of Stanford.

Nicolas Namias started his career at the French Ministry of Economy and Finance in 2004. He was in charge of preparing G8 and G20 summits prior to being appointed substitute Government Commissioner at the Autorité des marchés financiers (French financial markets regulator). In 2008, Nicolas joined the Finance department of Groupe BPCE and then became Head of Performance Management for retail banking and insurance activities. In 2012, he was appointed Advisor to the French Prime Minister for economy financing and international economic affairs. Nicolas came back to Groupe BPCE in 2014, as Head of Strategy and a member of the Executive Committee at Natixis. In this capacity, he has coordinated the external growth transactions carried out by Natixis since 2014.

He is a member of the Board of Directors of IFCIC, Institut pour le Financement du Cinéma et des Industries Culturelles (Institute for the Financing of Cinema and Cultural Industries).

Nicolas Namias, 41, is an alumnus of École Nationale d'Administration; he is also a graduate of the Stanford Graduate School of Business (Executive program), of the ESSEC Business School, and of the Paris Institute of Political Science (Sciences Po).

Christophe Lanne began his career in 1990 as Inspector for Banque Indosuez.  In 1995, he became Global Markets General Secretary and later Head of Fixed Income, Forex and Treasury in London. In 2002, he moved to Tokyo to take up the position of CEO at Crédit Agricole Indosuez Securities, Japan.  In 2005, he moved on to Credit Suisse as CEO and COO for all Credit Suisse businesses in France (Investment Banking, Asset Management, and Private Banking) and was a member of the EMEA Management Committee. In 2010, Christophe joined Natixis as Chief Operating Officer, Corporate & Investment Banking and member of the Executive Committee. In 2012, Christophe was appointed Head of Portfolio Management, Global Transaction Banking and Run-off activities. Since 2015, Christophe has been Natixis Chief Risk Officer. 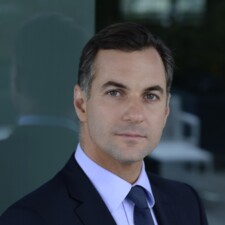