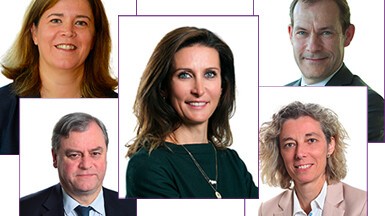 Appointments to the Natixis Executive Committee

Frédéric Chenot started his career as an inspector and audit mission manager at Groupe BPCE from 1992 to 1999, before joining Banque Populaire Atlantique in 2000 where he was in charge of Organization and IT, and subsequently Corporate Secretary and Deputy General Manager. In 2010, he was appointed CEO of Natixis Financement and member of the Natixis Executive Committee. He joined BPCE as Head of Development for Banque Populaire and joined the Groupe BPCE Executive Committee in 2015 and was later appointed Deputy CEO for retail banking and insurance. He has been Head of Payments for the Banque Populaire and Caisse d’Epargne networks at Natixis Payments since April 2019.

Frédéric Chenot, aged 51, is a graduate of HEC and CEMS ­ The Global Alliance in Management Education.

Sophie Didelot started her career in 1995 as a lecturer and researcher at the University of Reims Champagne-Ardenne. In 2000, she joined Société Générale where she undertook a number of roles in the risk department, notably in credit risk monitoring, before being named Head of Capital Planning and Prudential Regulation at the Finance and Development department in 2007. She joined Groupe BPCE in 2011 as Head of the Consolidated Risk Steering department and was later appointed Head of Consolidated Analysis and Models at the Risk, Compliance and Permanent Control department. She has been Head of Enterprise Risk Management in the Natixis Risk Supervision department since October 2018.

Sophie Didelot, aged 48, holds a Ph.D. in mathematics from the University of Reims Champagne­Ardenne and a post-graduate degree in statistics and random models in economy and finance from University Paris VII and Paris I.

Chloé Mayenobe started her career as an internal audit supervisor at Deloitte in 2000. She joined Capgemini in 2005 as international internal auditor, then in 2006, at the heart of Ingenico Group’s transformation, she has successively taken on the EVP Governance & Risk role, then turned to lead the Western Europe region before being promoted to EVP Europe - with a particular focus on retail activities. She has been Head of Growth & Transformation at Natixis Payments since September 2018.

Chloé Mayenobe, aged 43, is a graduate of ESCEM ­Tours, and holds an MBA from San Diego University.

Teresa Mora-Grenier started her career as a senior finance auditor at PWC in 1994. She then moved to the General Inspection department at Crédit Lyonnais in 1997 and was later appointed Head of Management Control for the equity brokerage business at Crédit Lyonnais Securities in London. She became Head of Management Control and Treasury at Crédit Agricole Cheuvreux in 2004, and in 2010, she was appointed advisor to the Chairman of the Board at AlphaValue. She joined Natixis in 2011 as a manager in the Strategy and External Growth department, and later became Corporate Secretary and member of the Management Committee for the Specialized Financial Services division. She has been Head of Financial Control at Natixis since May 2018.

Teresa Mora-Grenier, aged 48, is a graduate of EM Lyon and holds an Executive MBA from ESCP Europe.

Richard Vinadier, aged 57, is a graduate of IEP Paris and holds a chartered accountancy certification.