Jean-François Lequoy appointed Deputy Chief Executive Officer of Groupe BPCE, Member of the Management Board in charge of Finance and Strategy

Groupe BPCE’s Supervisory Board today approved the appointment of Jean-François Lequoy, currently Chief Executive Officer of Natixis Assurances, as Member of the Management Board of Groupe BPCE, in charge of Finance and Strategy.

He will assume his functions on September 14 and succeed Nicolas Namias, following the latter’s appointment as Chief Executive Officer of Natixis on August 3.

Jean-François Lequoy joined Natixis in 2014 with a remit to set up an insurance business geared to making Groupe BPCE a fully-fledged bancassurer. At Natixis Assurances, he successfully created an integrated, efficient insurance group serving the Banques Populaires and Caisses d’Epargne banks, both in the non-life insurance and life and personal protection insurance fields, thanks notably to numerous industrial investments and the re-definition of strategic and industrial partnerships in these fields.

For Laurent Mignon, Chairman of the Groupe BPCE Management Board: “Thanks to his perfect grasp of strategic and financial issues, recognized leadership abilities, sense of customer service and strict project-management discipline, Jean-François Lequoy will make a decisive contribution to the work of the General Management Committee, particularly regarding the development of our future strategic plan”.

Jean-François Lequoy began his career as an Insurance Commissioner in the department of the French Ministry of Finance in 1986.

In 1991, he was appointed Deputy Director of the Insurance department of Compagnie de Suez, then in 1994, Managing Director of the insurance broker J&H Marsh & McLennan, before becoming in 1998 Director and General Manager of La Mondiale Partenaire (formerly known as La Hénin Vie).

He joined AGF (Allianz Group) in 2001 as Chief Financial Officer, then became a member of the Executive Committee in 2003 and was appointed Deputy Chief Executive Officer in 2004.

From 2008 to 2014 he held the position of General Director of Federation Française des Sociétés d’Assurances (the French Insurers’ Federation- FFSA). In 2014, he became CEO of Natixis Assurances and a member of the Natixis Senior Management Committee, then in 2019, Chairman of the French Bancassurers’ Federation (GFB).

Jean-François Lequoy, 59, is a graduate of École Polytechnique, ENSAE and France’s Institute of Actuaries. 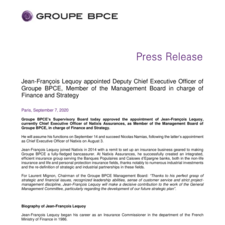