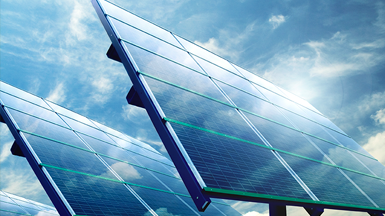 Support for renewable energy: EIB joins forces with Natixis to co-finance the construction of nine solar power plants in Spain

During the recent climate change conference, COP 25, in Madrid, the European Investment Bank (EIB) signed two major agreements to further the renewable energy agenda in Spain. The EIB, which has hiked its climate focus with a view to becoming the EU’s climate bank, will provide EUR 66m to investment bank Natixis to support the implementation of two photovoltaic solar energy projects in Spain. Both projects will help Spain reach its goal of ensuring that 42% of the energy it uses comes from renewable sources by 2030, as set out in the National Energy Plan. The agreement was signed at COP25 by the EIB Vice-President responsible for climate action, Emma Navarro, and Natixis’ most senior representative in Spain, Jean-Philippe Adam.

Firstly, the EIB will provide EUR 25m to Natixis to build eight solar power plants with a capacity of 254 MW. It will generate 438 GWh of electricity per year from photovoltaic energy, thereby avoiding the release of 204,000 tonnes of CO2 into the atmosphere. Three of these plants will be in the municipality of Tordesillas, Valladolid. Three further plants will be built in Salamanca (two in Valdelosa and one in Palacios del Arzobispo), another in the municipality of Casatejada in Cáceres, and lastly, one in Huesca, in the municipality of Poleñino. The project will employ 400 people during the implementation phase and 50 on a permanent basis.

The plants are owned by Solaria Energía y Medio Ambiente S.A (also the project’s developer, builder and operator). Solaria is a Spanish company that specialises in the photovoltaic sector and was among the successful bidders in the tender for new renewable electrical energy production facilities held in Spain in July 2017.

The second solar power project supported by the EIB will be in Alcalá de Guadaira, Seville, with the EU bank providing EUR 41m to Natixis to finance its construction. The project promoter is Spanish company Novasol Invest La Isla, which is located in Seville and was also a successful bidder in the 2017 renewable energy tender.

This complex will have a total capacity of over 182 MW and will be capable of generating 341 GWh of electricity a year, without producing polluting emissions of any kind, while preventing the release of 127,000 tonnes of CO2.  The project will employ 300 people in Andalusia during the implementation phase and 40 on a permanent basis to operate the plant.

At the signing ceremony during the COP25 Climate Change Conference at IFEMA in Madrid, EIB Vice-President Emma Navarro, responsible for the Bank's climate action and its activities in Spain, highlighted the positive impact of both projects in helping to achieve the EU's climate targets, “The EIB will make a substantial contribution to these ambitious goals by mobilising up to EUR 1tn in financing to promote the transition to a new economic model. Spain is being asked to play a key role in the transition to a low-carbon economy. Projects like this demonstrate the direct positive impact of EIB activity on investments promoting clean energy in our country, while also helping to create jobs.”

Head of Natixis in Spain Jean Philippe Adam pointed out the important role that the financing plays in the fight against climate change and Natixis’ active contribution to financing renewable assets across the globe. Natixis is the first financial company to actively manage the climate impact of its balance sheet, incorporating a tool (unprecedented in the market) that measures the climate impact of each asset by applying a Green Weighting Factor.

The EIB and climate action

The EIB is among the world's largest multilateral providers of green finance. The Bank's goal is to be a leader in mobilising the finance needed to keep global warming to under 2 ˚C and limit temperature rises to 1.5 ˚C in order to meet the Paris Agreement objectives. On 14 November, the EIB Board of Directors approved its new climate objectives and the new energy lending policy. The Bank will gradually increase its financing for climate and environmental objectives up to 50% by 2025, with the goal of ensuring that the EIB Group mobilises at least EUR 1tn by 2030 to promote investments helping to meet these objectives. It also announced its intention to align all EIB Group activities with the Paris Agreement. To this end, the EIB will cease financing fossil fuel-based projects by the end of 2021.

In 2018, the EIB provided almost EUR 1.3bn to support climate action in Spain by financing projects involving the development of cleaner means of transport and implementation of new, less polluting and more environmentally friendly, production processes.

The European Investment Bank (ElB) is the long-term lending institution of the European Union owned by its Member States. It makes long-term finance available for sound investments to contribute towards EU policy objectives.